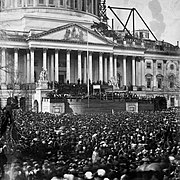 Abe : a novel, by Richard Slotkin. pub. 2000, 478 p. Slotkin's young Abe Lincoln may owe something to Twain's Huck Finn and his trip down the great Mississippi, but it owes far more to Slotkin's own fine wit and inventiveness as well as years of research into American frontier life. Novels about revered historical figures are notoriously difficult to bring to life, being chained to plausibility and to a story line already too well known. Slotkin's Lincoln, traced from a toddler of two to a muscular 23 embarking on his first campaign for public office, is funny, robust, a rough and tumble lad of the frontier who longs to live on a greater stage--an idea planted in him by a few treasured books.

Abraham Lincoln, by George McGovern, pub. 2009, 184 p. In this compact but convincing portrait, McGovern assesses Lincoln's greatness in terms of his ability to use his humble origins, empathy, keen sense of justice, uncommon skill in seeing the essence of an issue, faith in American democracy, gifts of language, and personal self-confidence-all to become a masterly lawyer, a party leader, commander in chief, and a heroic figure with both the vision and the practicality to realize his purposes. McGovern breaks no new interpretive ground here, but he knows the recent scholarship well enough and kneads it into his book.

Reminiscences of peace and war, by Sara Agnes Rice Pryor, pub. 1904, 402 p. Sara Pryor was a Virginian. Married to a pre-war Congressman, who left to support the Confederacy, became a brigadier general, and then resigned to become a private (!), she followed her husband throughout the war. Her memories, written when she was in her 70s, describe pre-war Washington, life in the army camps, the hospitals in Richmond, and such incidents as a bread riot in Richmond.